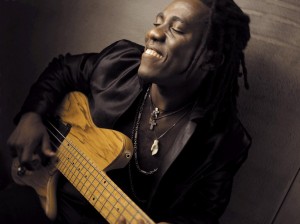 We have now been lucky enough to have the exclusive right to present this eminent musician to our Scandinavian audience.

Richard Bona was born on October 28, 1967 (age 46) in Minta, Cameroon.  Bona is a singer/songwriter, bass player, composer, bandleader, and digital and analog engineer/producer with a singular artistic vision.
“People play music the way they speak,” says Bona. “The music comes from the language.”  Bona speaks four of Cameroon’s 24 major languages (Douala, Banwele, Pongo, and Ewondo), in addition to French, English and bits of Spanish, Japanese, and other tongues. No surprise that his own musical vocabulary is so dazzlingly expansive.